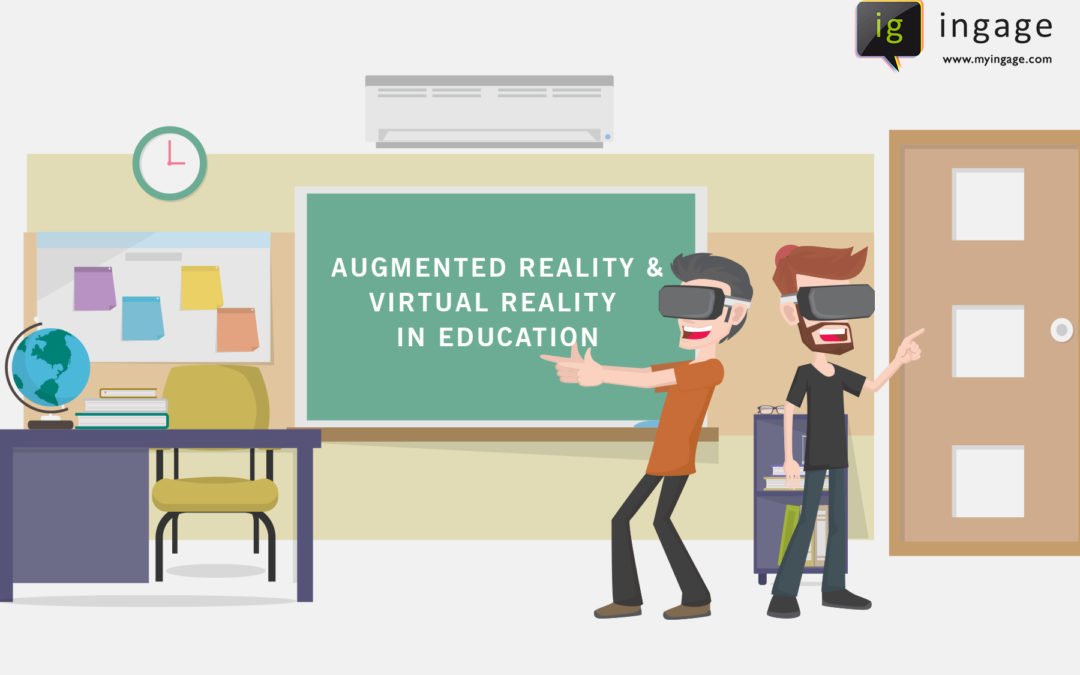 Why Augmented Education is sweeping the EdTech World?

Augmented reality education is a hot topic in the EdTech (educational technology) conversation. It’s no secret why. Both it and virtual reality are quickly entrenching themselves in the modern educator’s toolbox

Education and technology are interconnected. This synergy is able to transform the world we live in. The contradictory phenomenon is that while being an early adopter of technology, education is also one of the last sectors to be fully transformed by it, due to institutional inertia and a number of other reasons

As the world becomes more sophisticated and complex, the use of emerging technologies becomes more and more critical to education. Giving students a familiarity with the concepts and use of technology is one of the most important things a teacher can do.

Basic computer skills have been a core piece of the curriculum for many years. Just as important is keeping that curriculum updated with new technologies that are making a true impact on the world. Here is how augmented reality is making that kind of impact on education.

Perhaps one of the best reasons to use augmented reality in education is its ability to remove the barriers of language, culture, and geographic distance. Through the power of AR, students and educators can understand each other better than ever before. It opens doors to communication and learning that were, until now, firmly shut.

For the educator, the possibilities are immense. Although translation services have certainly existed in the past, never before have they been so easy and accessible. Google Translate is free and works on almost any modern mobile device. Using it, students can enjoy lectures and writings from experts and speakers around the world. Even better, a foreign lecturer can step into a classroom and immediately engage with the students naturally and without fumbling for words.

A nationwide survey conducted by Samsung  (US) in June of 2016 found that the education industry is more than ready for virtual reality and augmented reality learning. According to the survey, teachers and students alike had very positive notion about this technology

68% of Teachers who would like to use the Technology

This certainly extends to augmented reality as well, as the two technologies are inextricably linked in the minds of the public. AR is exciting and new, and nearly everyone who uses it immediately feels the sense that it represents a genuine change in the technological landscape. Augmented reality brings its own engagement, its own fun, and students cannot help but be curious and interested when the digital and the physical begin to merge.

Another of the greatest benefits of AR in education is the way it enables and expedites collaboration between groups of students. Collaborative augmented reality, as it is known, is already making an impact in the corporate world. It stands to be just as important in education.

A great strength of augmented reality is its ability to level the perceptions and experiences of disparate groups of people. Through the aid of digital imagery injected into the physical world, groups of students who are separated by geography can collaborate as easily as though they were in the same classroom.

Some of the most promising research in this field involves the uses of augmented reality in higher education. In the academic journal Computer Supported Cooperative Work (CSCW), an international group of education professionals describe a number of such applications in a research paper titled “Collaboration in Augmented Reality”. According to the paper, AR has been used to allow geographically dispersed scientists to explore archaeological dig sites, and to enable educational presenters to create immersive 3D environments inside their lecture halls.

Since many AR apps require only the use of a smartphone or tablet, with no need for additional specialized equipment, the technology is wonderfully suited for use on field trips and other out-of-school learning. There are already several augmented reality apps for education that are well-suited to this type of learning, and more apps are released on a regular basis.

Star Walk (available for Apple and Android devices) is one of the best examples. Developer Vito Technology has applied the principles of augmented reality to one of humanity’s oldest learning pursuits: astronomy. By aiming his or her phone at the sky, students can instantly identify constellations and call up information about them. It is not difficult to imagine entire classrooms heading out at night, racing to be the first to “discover” Cassiopeia or the North Star.

Finally, augmented reality is new. The technology is both novel and relevant. It is quickly becoming a vital part of how we live, work, and play. An effective education must include training and experience in the technologies used in the modern workforce, and therefore education should include AR.

The fact that augmented reality education apps are fun, engaging, and effective is almost a side benefit to this. The fundamental truth is, students increasingly need a grounding in VR and AR in order to learn advanced computer science or other disciplines later in life. Just as when personal computers first began to saturate the market, today students need to be given a familiarity with VR and AR,

As with any new technology, augmented reality app development or setting up an AR/VR experience centers poses a unique set of challenges and variables. Understanding the full capabilities (and limitations) of AR requires in-depth knowledge and training, and an intimate familiarity with the ins and outs of this burgeoning industry. The opportunities in augmented reality education are enormous, but so are the potential stumbling blocks.

That is why the selection of the right AR development partner is critically important to the success of any such project. A good development house can help define the project’s scope and function. It can identify potential problems before they cause delays, and it can add a wealth of experience, ideas, and innovation to make an app even better than its original idea.

Ingage Technology is that kind of development house.

“We empower our clients to see the future and experience virtual environments. Our award-winning Virtual Reality, Mixed Reality, and Mobile Applications bring products and projects to life by crafting stunning interactive experiences”.

The company and its employees have worked with the bleeding edge of technology for years across multiple industries. It is expert not only in AR/VR app creation, but also in Oculus Rift, Holo lens and general technology consulting.

Under the leadership of CEO Vijay Karunakaran, Ingage Technology is ideally positioned to bring new ideas in augmented reality education to life. The success of any app is predicated on great ideas, and even greater execution. Ingage brings the very best in execution.

Come and experience us @ https://www.myingage.com/