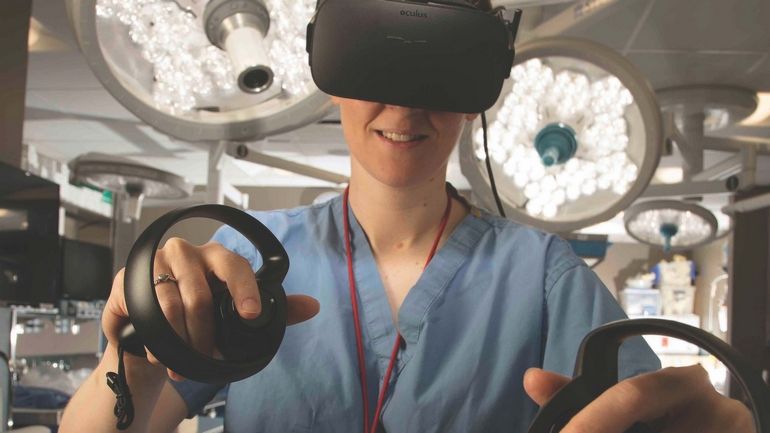 The procedure was over in a matter of minutes.

Dr Cynthia Kahlenberg, a fourth-year medical resident at Hospital for Special Surgery, had done her best to get her bearings in the cavernous operating room. She initially dropped a surgical rod before successfully placing it in the tibia of a sedated patient with a broken leg.

The patient had been jogging in Central Park and was struck by a cab, explained Dr Anil Ranawat, an orthopaedic surgeon and director of the sports medicine fellowship at Hospital for Special Surgery. He chided Kahlenberg for making the surgical hole too large, although he was impressed with her speed.

But under the bright surgical lamp on the stainless steel table in front of her, there was no patient with a broken leg—only a laptop running the software projected into Kahlenberg’s headset. When she took off her virtual-reality goggles, she was back in the Bioskills Education Lab on the eighth-floor of HSS in Manhattan.

The orthopaedic speciality hospital is testing new software from Palo Alto, Calif.-based Osso VR. The technology could offer a way for residents at HSS and other hospitals to hone their surgical skills before progressing to other types of simulations, such as operating on cadavers.

Virtual reality is emerging in healthcare as a high-tech solution to problems as varied as training doctors, reducing medical errors and helping patients manage pain. The technology’s proponents wax enthusiastic about its potential to provide on-demand training. But others say it still has a long way to go to replicate a real-world medical environment.

Virtual-reality simulations could prove particularly useful in many procedure-based areas of medicine, such as anaesthesia, to introduce new physicians to the steps needed to complete a task, said Dr Mathias Bostrom, a hip and knee surgeon and the vice chairman of education and academic affairs at HSS.

Bostrom first spotted Osso VR at a trade show and was impressed when the company came to the hospital to demonstrate the technology. “Certain industries such as aviation have been doing simulation for many decades,” he said. “It’s been relatively late in coming into medicine and surgery.”

For decades HSS has been using sawbones—artificial bones that residents can practice on—as well as cadavers in its simulation lab.

“Cadavers are still the gold standard of how to teach young surgeons,” Ranawat said.

The prep and cleanup for VR simulations are simpler too. “I don’t have to thaw the computer,” joked Justin Dufresne, manager of the Bioskills lab, gesturing to a nearby cadaver lying on a dissection table under a blue sheet.

A few weeks earlier Osso’s co-founder, Dr Justin Barad, had given a demonstration at a medical technology conference at the Javits Center. To date, the company’s clients mostly have been medical device makers that use VR to help surgeons practice implanting their products. Barad, who worked as a video game developer before he became an orthopaedic surgeon, said the simulation can save device makers the expense of sending sales reps around the country or flying in doctors for demonstrations.

Osso has raised $2 million in venture capital funding thus far. It also won $480,000 in cash and prizes at an EdSim Challenge held by the U.S. Department of Education. Many medical VR companies, including Osso, are using off-the-shelf goggles and other hardware such as Oculus’ Rift.

Barad said training for novice surgeons can be inconsistent. For example, one of his co-residents at UCLA finished a hand surgery rotation without ever operating on a wrist fracture, a common surgery, because no one had broken a wrist during that two-month period. “We’re just relying on chance for how we’re training this highly skilled population,” Barad said. “There’s no standardization for what they’re exposed to, so people don’t have a common foundation to build upon when they’re out in practice.”

Barad hopes that experienced surgeons will use VR to learn new procedures or practice operations they seldom perform. The company recently released a feature that allows multiple users in different locations to work together in a virtual operating room.

In a company-run pilot study of two groups of first-year medical students, those who were trained with Osso VR performed a procedure nearly twice as proficiently as those who underwent traditional training using the Global Rating Scale, a scoring system for surgery. The grader was not aware of which students had used each training method.

HSS isn’t alone in experimenting with VR. Osso’s product is in use in seven other orthopaedic residency training programs around the U.S., including Northwell Health’s Long Island Jewish Medical Center in Queens and Columbia University. Companies such as Chicago-based ImmersiveTouch offer to compete for software for surgical simulation and a program that allows doctors to view CT scans and MRI images in a virtual setting with a 3D view of the patient.

Northwell is working with Visual Lab 360 on a simulation for medical students and new nurses at its Center for Learning and Innovation in Lake Success, Long Island, to help identify medical errors. The trainees use a VR device and receive a clinical report from a physician before entering a “room of horrors,” where they need to spot the safety traps. Afterwards, the user receives a performance report. Northwell runs 20 such clinical scenarios.

But the hospital network has struggled with how to extend its program to more areas of the health system.

“How do you scale this?” said Kathleen Gallo, chief learning officer at Northwell. “Do you order 66,000 goggles?”

As VR technology becomes more immersive, it will become a more effective tool, Gallo said. It’s also important that health systems test these types of technologies, she said, and work with companies to adapt their products to meet the industry’s needs.

Repeating a procedure is important for learning. Author Malcolm Gladwell has said it takes 10,000 tries to master a new skill. But the operating room experience doesn’t always make that possible, Elbuluk said. “The fact that I can come in here and it will walk me through it step by step with the instrumentation, it’s positive,” he said.

But not everyone is sold. For Kahlenberg, who had previously trained in the operating room and on cadavers, the experience of training through virtual reality was less useful than other methods. She noted the knee joint in the simulation never varies, and the weight of the tools in her hand didn’t feel accurate.

“Every human knee is a little bit different, and there’s variability in the soft tissues and the feel of the soft tissue,” she said. “You have to adjust if it’s a really hard bone versus a soft old-lady bone.”

The sensation the controllers delivered as she was drilling and nailing also was different.

“You get some very slight feedback, kind of like when you’re playing Xbox and your car crashes,” she said. “I think it has the potential to be helpful in the future, but it has a long way to go before it becomes a realistic training tool.”

The HSS lab also has a VirtaMed simulator that is equipped with an upper torso, poked with small holes in the model’s shoulder. It is mounted on a display cart with a video screen. Trainees can use a probe to perform arthroscopic surgery, removing any damaged tissue through a small incision while learning to use the camera to view a patient’s joint. Elbuluk learned to adjust the camera while struggling to suck out damaged cartilage.

While the VirtaMed simulator is well suited for arthroscopy, it can’t simulate fractures like Osso’s VR software, which allows users to drill into virtual bone, providing feedback that simulates cutting into tissue.

Speaking of Elbuluk, Ranawat said, “I can’t let him experiment on my patient. We have to train them in more modern techniques to get 10,000 hours,” he said. “It’s all about reps.”